The Nissan Leaf Drive Electric Tour stopped in Franklin this weekend at Nissan's North American headquarters. I signed up to drive some weeks ago and our group was the first to drive Saturday morning. 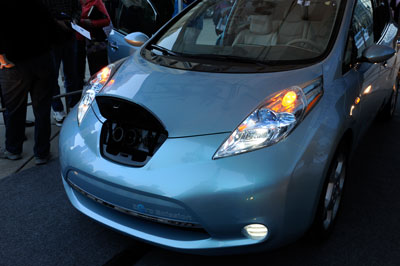 In short, the Leaf felt like any other small car.
It felt good. The Nissan Leaf feels just like any other small sedan on the market. And that's a good thing. Actually, the car is quite a bit smoother and feels more solid than most. (The Chevy Aveo is a nightmare on the interstate). But all things considered, aside from the dashboard, there's nothing else about the drive that tells you you're steering an electric car.

The test drive lasted approximately two and a half miles including some interstate time. Acceleration was excellent. I had no trouble getting up to interstate speeds (70mph).

Range Indicator needs work The only thing that really bothered me was the range indicator. The car indicated 103 miles in available range when we left, yet after returning 2.5 miles later, the car indicated 78 miles available. I'm sure the range algorithm is to blame. Even our tour guide said it was just recently updated to factor in hills. And granted, it was a cold morning (low 40s) with interstate driving and heat blasting. That would take some time to get used to. I wonder if it wouldn't be more acceptable as a simple full/empty gauge rather than trying to indicate range down to individual miles. Even most gas cars don't try to do this.

A Different Driving Interface The gear shifter was another oddity where Nissan is trying something different. The car can be in park, drive or eco drive. But it's not your standard shifter. To shift from park to drive, the "shifter" is more of a nob that you drag in a "C" shape, then the nob retracts to it's original position. The car is placed back in park by pressing the "P" button located in the middle of the shifter nob. That's all fine once you get used to it, but if Nissan really wants to get people into electric cars, giving them unfamiliar controls seems to take away from the goal. It's just one more excuse for someone not to buy.

Reverse and Neutral were not readily obvious. I was so curious with Drive and Park that I didn't even think to ask about those other two. 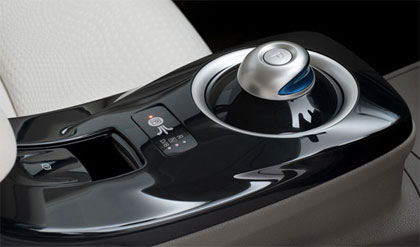 This photo from Nissan is actually a bit different from the actual model I drove.

Minimal Maintenance, Awesome Accessories With an electric car you do away with oil changes, radiator fluid (and leaks) and lots of other little sub-mechanics like fuel pumps, water pumps and thousands of moving parts that make up a gasoline engine that inevitably need to be serviced and maintained.

You can basically control the Leaf from your phone. The car can notify you if you forget to pug it in at night. You always know where the closest charging station is, and here's the interesting part, Nissan can tell you if someone is using a specific charger. This is huge because this means Nissan knows when, where and how much electricity each car is acquiring (and spending). The data Nissan is collecting is impressive. I assume they'll use it to learn the habits of drivers and to make improvements over time. 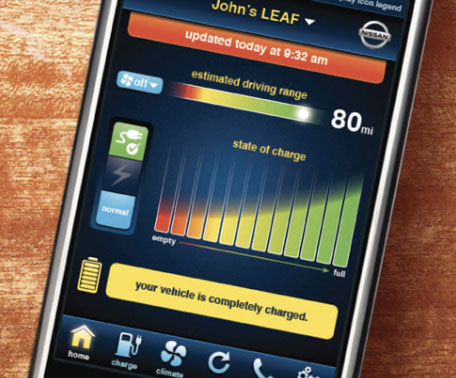 I'd Buy One If I had an extra $32K hanging out, I'd absolutely buy a Leaf. I'd be paying an early adoper fee at this point, but that's okay with me. My commute length (30 miles round-trip) is ideal. Even with our current cars, we rent when taking long trips, so no change there. The Leaf has a funky look, but it could look twice as weird and still not matter as long as I never had to pull up to a gas pump again.

All in all, the Nissan Leaf feels like a great car. The issues described above are just nitpicks which I would love to have the chance to get used to. Hey Nissan, can I barter some design work in exchange for a Leaf? I think that's fair.

Sorry for the lack of photos this time. We arrived so early, our group was ushered through with zero waiting and I never had time to even pull out my phone. Nissan also didn't have the "Win a Nissan Leaf Booth" manned, so unfortunately, I won't be winning a Leaf. :)

Here are a few photos from the Leaf tour from last year: 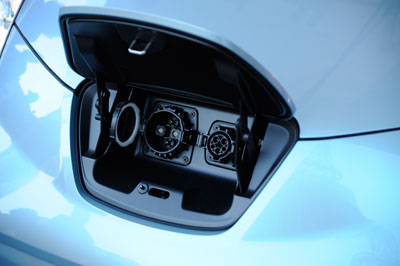 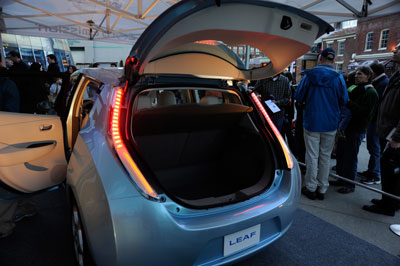 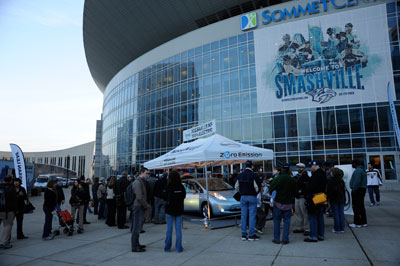