I'm officially posting my latest project, Kitty Litter Cam! I grew tired of the webcam pointing out the window capturing the occasional car going by, so I've moved it into the laundry room and pointed it at the litter boxes. With 4 cats in the house I figure the chances of catching some action was pretty good. 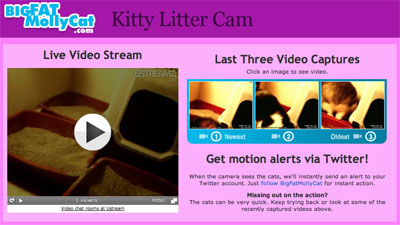 There's some fun stuff going on. The live feed is broadcast through Ustream while a second camera detects motion and uploads the video clips to the server. The motion detection software will also send out a Twitter message whenever motion is detected.

I'll post technical details later. In the meantime, enjoy the cats and their litter time!