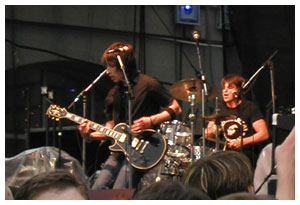 Spent this past weekend in Atlanta. We saw Weezer, The Bravery(pictured), and The Dead 60s down at the 99X Downtown Rocks show at the Underground. Basically Atlanta's version of Dancin' in the District. The crowd in Atlanta, however, makes Dancin' in the District look like a couple guys watching a street performer. There was blood, there was puke, people passing out, crying... we saw fights, flesh, and people jumping off streetlights. And it was all free. It was so weird seeing Weezer play all these songs from 12-13 years ago. Some of the kids in the crowd were in their teens, which meant they were barely born when that first album came out. Crazy. The Bravery did very well, and the Dead 60s sound much better live than on their album.

Probably the second best part of Atlanta was riding their rail system, MARTA. It sure beats driving. There was quite the crowd riding the train after the show. We were jam-packed inside that thing. The few people riding from the airport who were on before the train hit downtown were in for a big surprise when thousands of people piled onto that train.

So, came back from Atlanta late Sunday night and headed out to Memphis to visit some friends from UT until Wednesday. Went down to Tunica and played at the Blackjack tables for the first time. Our dealer was exceptional, pretty much telling everyone at the table wether to hit or stand. Aside from Tunica it was nice to get down to Memphis and reminisce a little bit.

A most excellent break from the daily workflow, indeed.