Apple Dashboard and how Widgets nearly ruled the world

The OS X Dashboard death knell has been tolling for some time, but it was once a premier space for front-end devs to show off.

This post is a look back on Dashboard's heyday but also how close Widgets came to being the obvious springboard to iPhone apps before the release of the App Store. 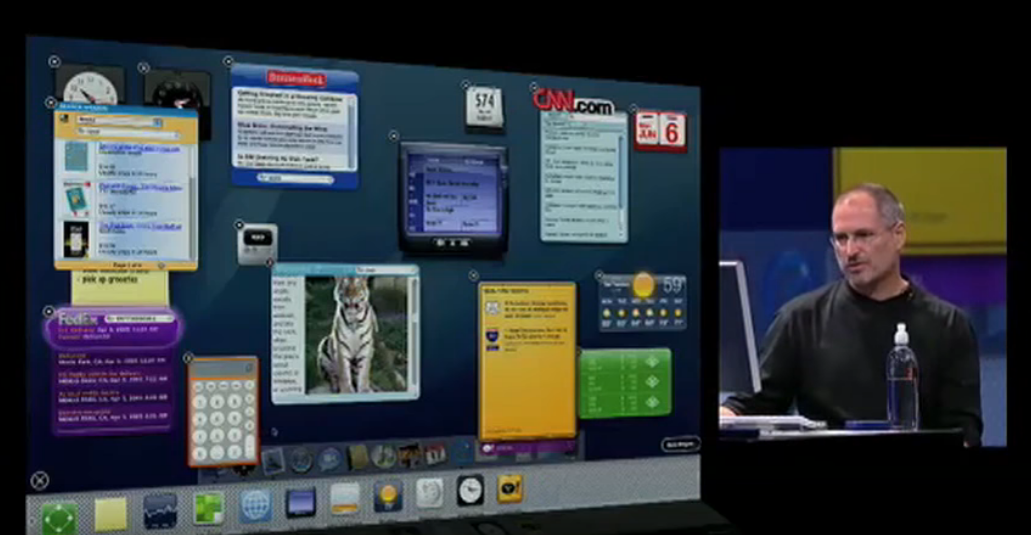 Dashboard was unique because its little applications (Widgets) weren't heavy Cocoa apps written in Objective-C, but instead HTML, CSS, and Javascript all running in Webkit.

This was a big deal because the barrier to application development became incredibly low. Any front-end developer could build an application that ran on the OS X desktop. It sounds trivial, but the divide between "application developers" and website builders was vast back in the early 2000s. (At least it felt that way for many of us.)

Apple was invested in Widgets. How invested? An entire section of the Apple website was dedicated to Widgets where users could download the little apps. This was never the case for traditional apps. Can you imagine an Apple directory and repository for desktop applications in that time period?

Apple also had a Widget category for the Apple Design Awards in 2006 and 2007.

Apple employees on the Apple Dashboard listserv encouraged Widget developers to enter the awards and so we did! I entered Candor Gallery, a Widget that rotated artwork submitted by a community of artists from around the world. I had so much fun developing the Widget and the system that allowed artists to send in artwork for consideration for display. I learned basic PHP and MySQL to support and build out this idea. The images and artist info would need to be stored and retrieved and submissions would need to be processed.

Eventually, Candor Gallery was displaying 1,700 unique pieces of art across 4,000 widget views per day. Apple published a count of 40,000 downloads at one point in time. Big numbers back then.

iCreate magazine asked if they could include Candor Gallery on a CD-ROM of software that was sent with every issue. CD-ROMS! Apple singled out Candor as the "Featured Download" on apple.com on multiple occasions. That's incredibly validating. 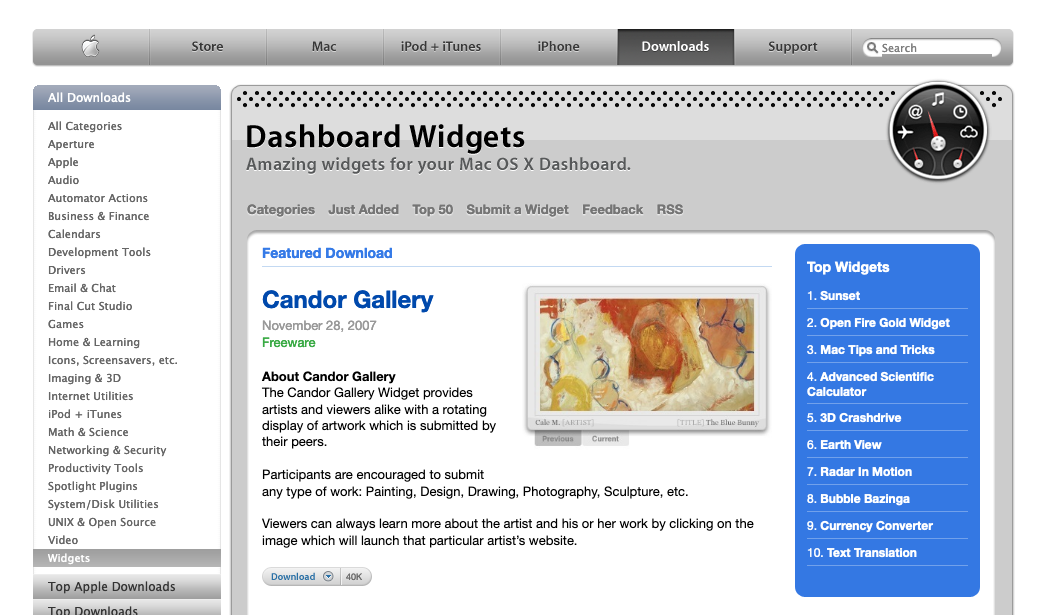 I even went to WWDC 2006 and was able to witness the Apple Design Awards ceremony. Candor didn't win, but it was exciting nonetheless.

WWDC 2006 was a bit of a dud in terms of announcements (Intel Macs in 2005 and the iPhone in 2007) but it was a fun experience. How many people can say they saw a Steve Jobs keynote in person?

Front-end development dominated several conference tracks and seeing the Webkit team talk about upcoming HTML and CSS support was exciting. Apple was heavily invested in the web and the technologies driving it.

This continued into 2007 after the announcement of the iPhone. Remember, during that first reveal, Steve Jobs was adamant about no native third-party apps running on the iPhone. Third-party apps would all be web based, driven by Webkit.

Web based you say? Looking at iOS and Dashboard, there was a clear relationship brewing. Widget icons even looked like iOS app icons! Widget developers rejoiced!

Porting Widgets over to iOS would be trivial and expose our apps to a much, much larger audience. Apple went so far as to release Dashcode, an application to help drive both Widget and iOS web app development. Front-end web developers were suddenly on equal footing with application developers.

And that high would run for another year until Apple announced the App Store and supplemental SDK to build native, third-party applications for iOS.

Bummer. With the App Store exploding with new apps every day, users turned their focus away from Dashboard and Apple soon did the same.

What could have been

Imagine if Apple had stuck to its guns and kept native third-party apps off its devices. The web might look different. Web standards might have advanced more quickly even across other platforms as Android and Windows Phone could very easily have followed Apple's lead on web based apps.

In the end, Dashboard had a good run and without it I may never have conquered my scripting fears by taking on things like PHP and SQL. In that regard, I owe Apple a lot of gratitude.