From Jackfish Lake in the Battlefords, I was off to High Level via Edmonton. Venturing even further north, the landscape becomes increasingly rural. Forrest, fields of hay dotted by oil pumps and grain elevators are the extent of the landscape. 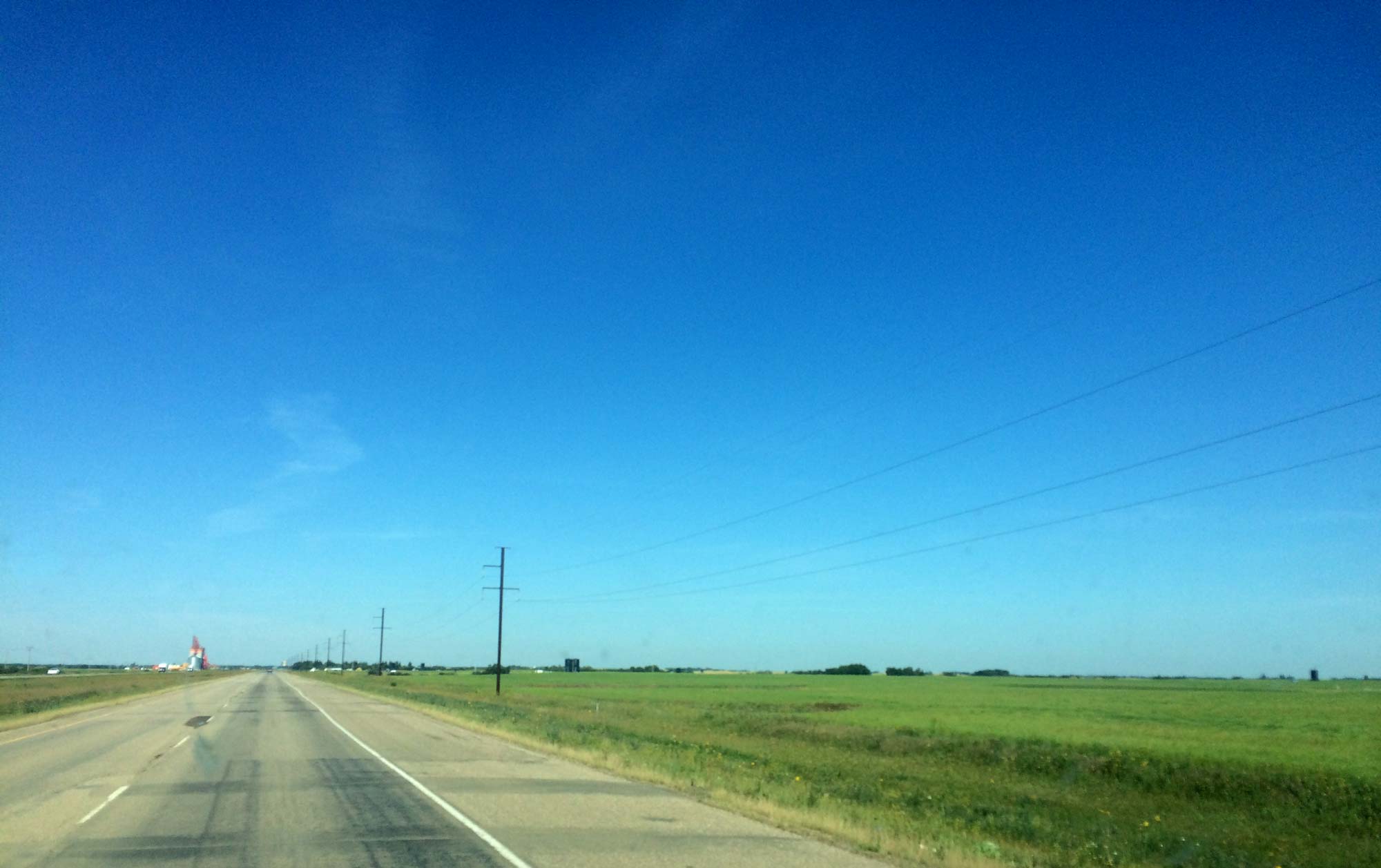 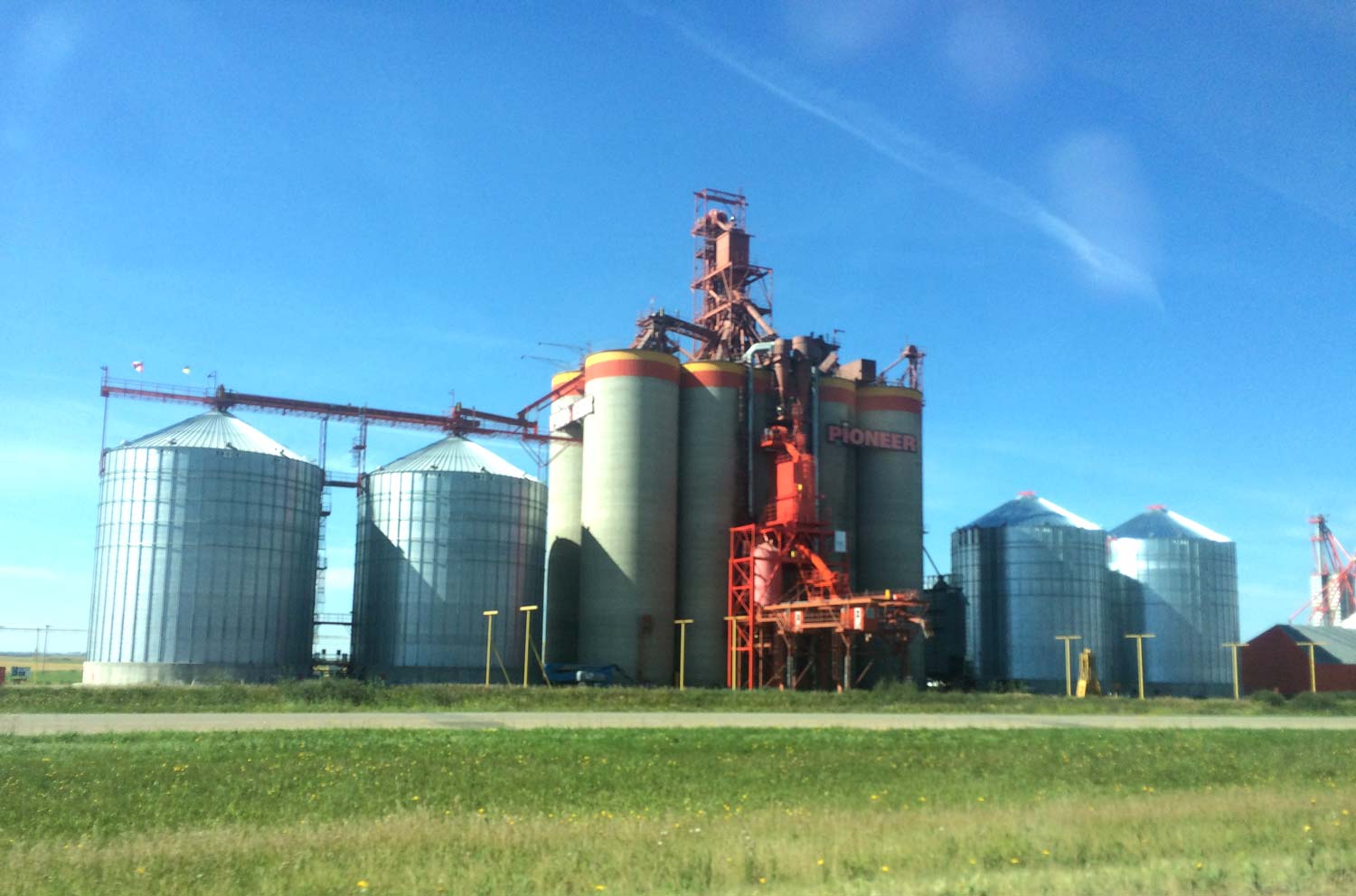 High Level meets those rural expectations. It’s a small town. A couple fast-food restaurants, hotels, and gas stations along with housing for about 3,000 residents. 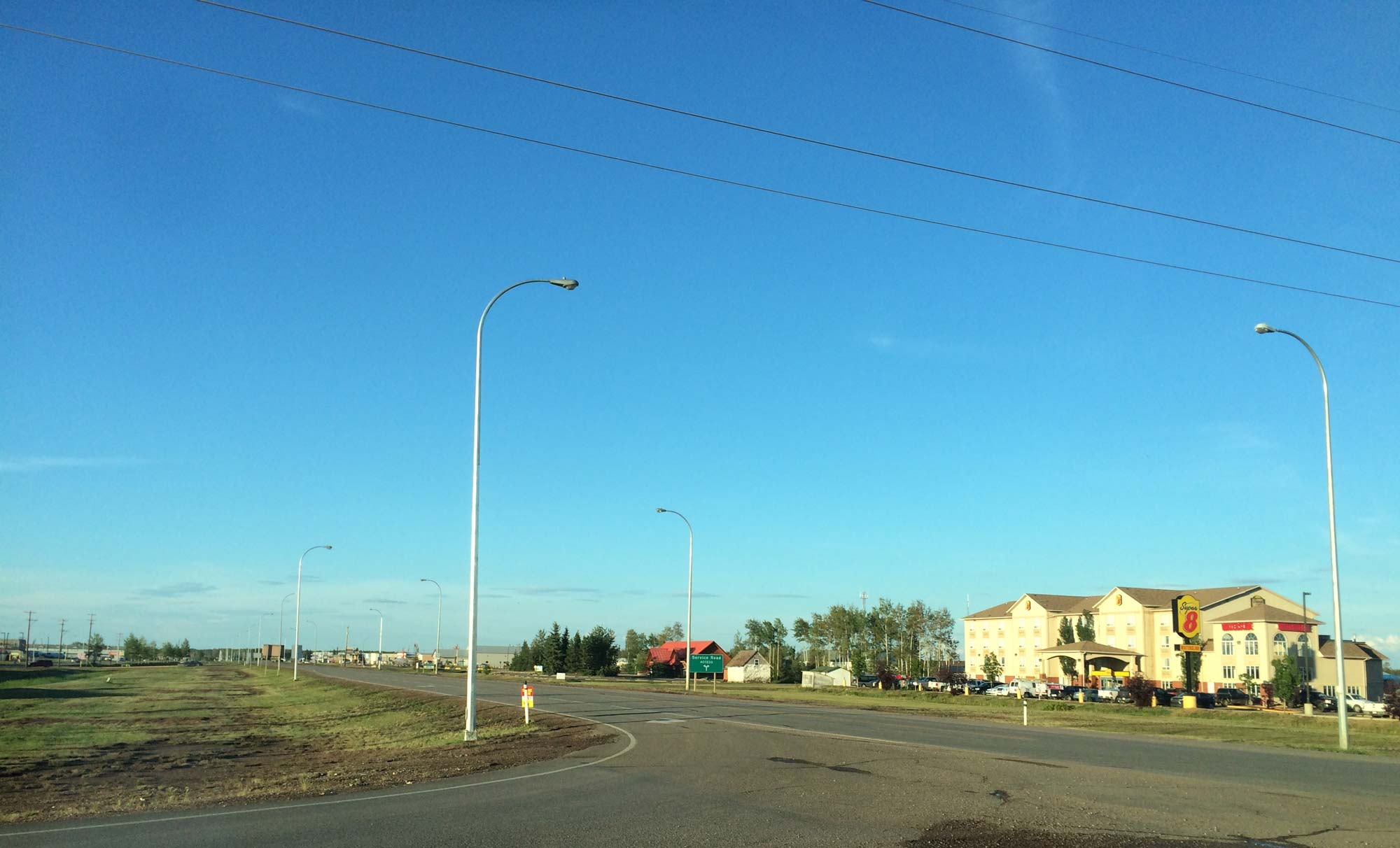 The hotels fill to capacity at night. The parking lots full of utility trucks, presumably working the numerous oil pumps, or timber industry. 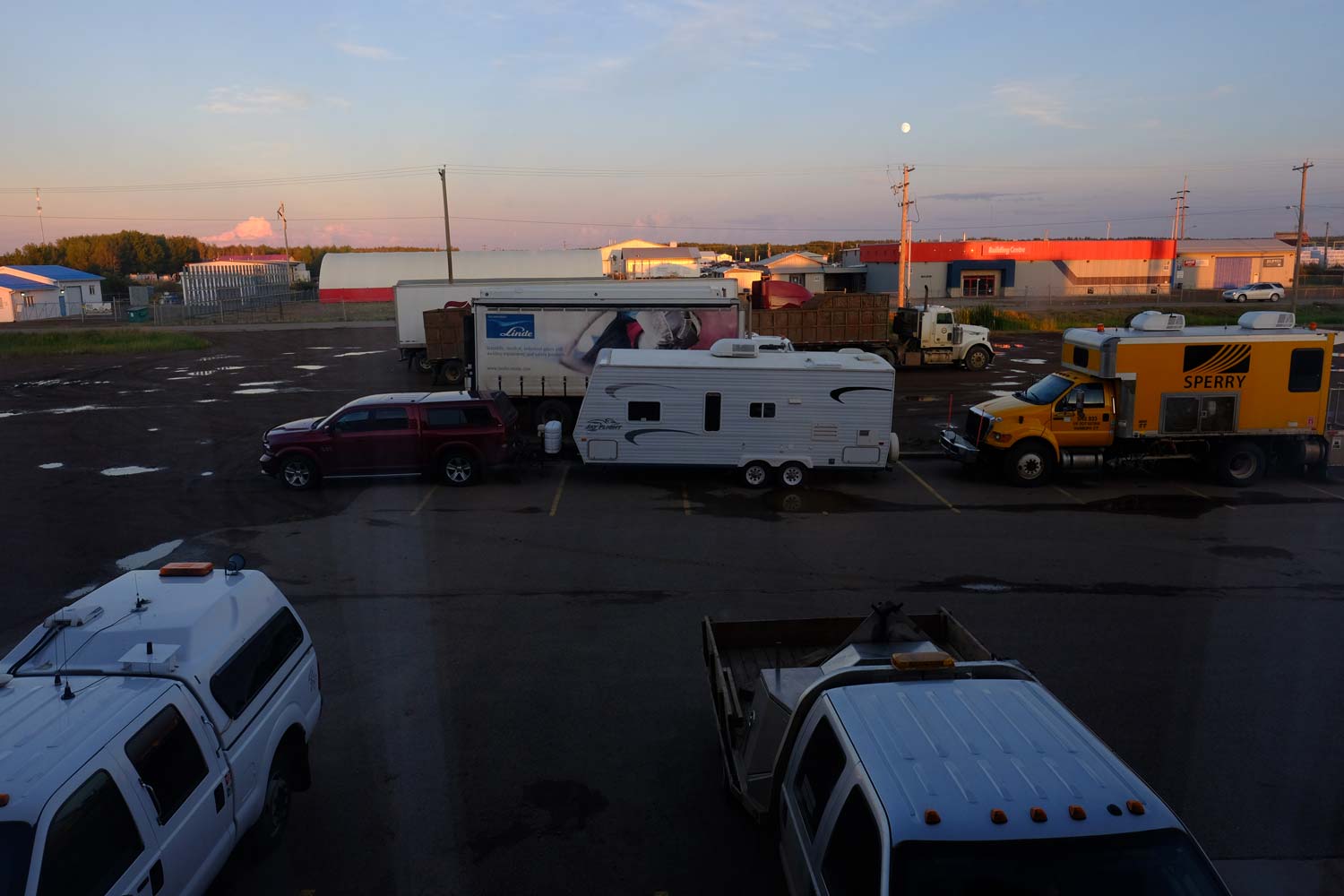 Work vehicles at the hotel.

High Level was my first experience with Tim Hortons! A mash-up between Panera and Dunkin’ Donuts, but with a “fresh” feel to it. I don’t know why they didn’t do better in the States. I was mostly after their coffee, which worked out just fine. 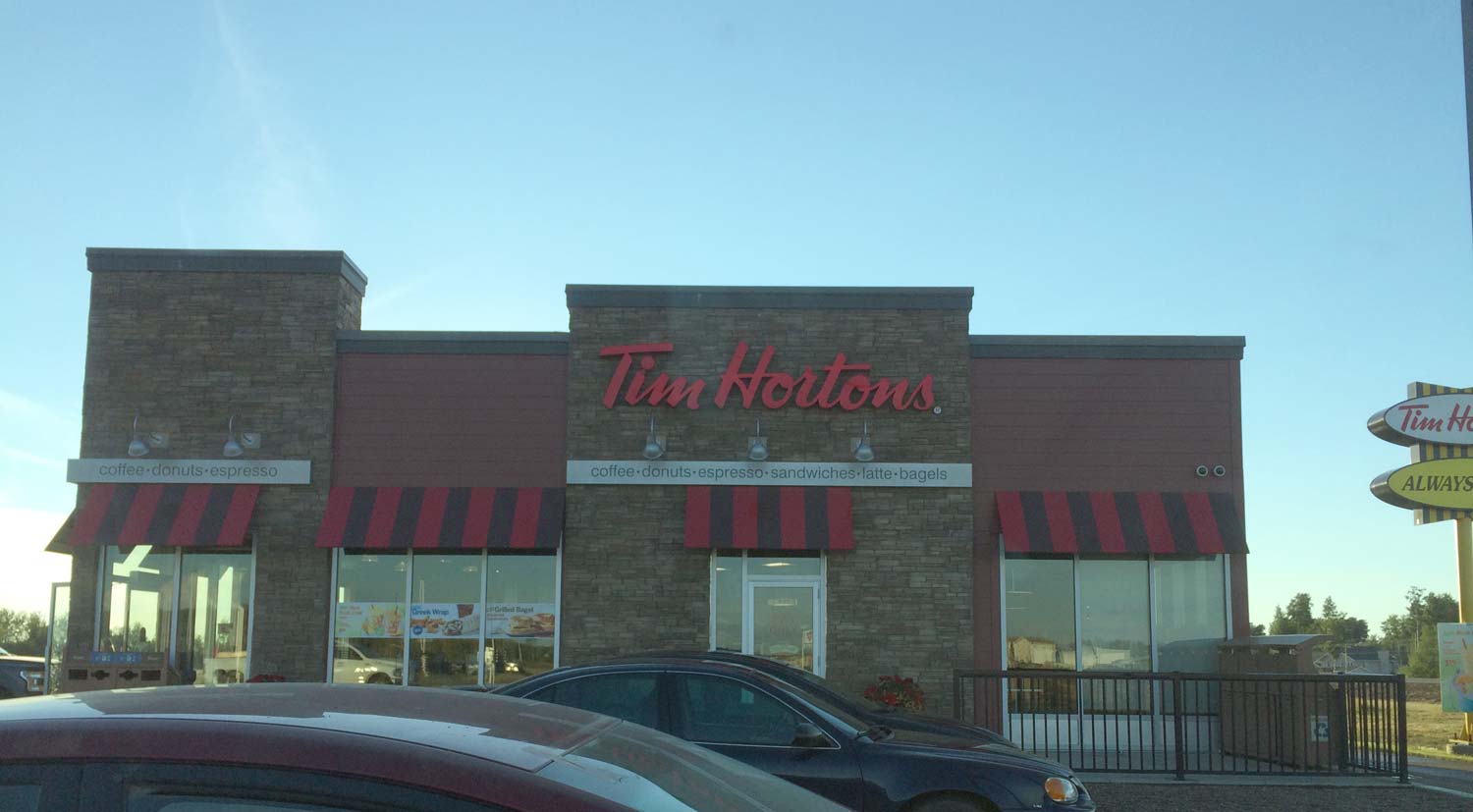 When initially planning this trip I didn’t expect an aurora viewing to be possible. Aurora occurs year-round, but at the northern latitudes, the night sun usually blocks out any chance to see the northern lights. However, the second half of August just happens to be the time of year when the sun is beginning its more winter pattern. Still, the sun doesn’t set until 9:30, so it means a late night trip to attempt an aurora viewing.

I planned a drive out to Hutch Lake which is about 20 miles north of High Level. I left the hotel between midnight and 1AM. The sun had set completely at that point.

Driving out to the lake, I really had no idea what to expect when looking for aurora. Intensity, duration, color… My expectation was that of watching a meteor shower. Very brief encounters of awesome every several minutes. The experience was nothing like that. Just a few miles from the lake I noticed a somewhat faint movement in the sky. Initially, I assumed it must be fog or clouds, but there was no mistaking what I was seeing and trying to describe how amazing it was is terribly difficult. It was tough to focus on the road for the last few miles of the drive to the lake. I was afraid it might not last and considered pulling over to the side of the highway.

One of the most surprising things about Canada was the presence of people in unexpected places at unexpected times. Driving to the shore of Hutch Lake I was somewhat nervous venturing into the wilderness without cell service and potentially any other humans for dozens and dozens of miles. However, pulling up to the lake shore, I found a late night party of campers in RVs. As I set up my camera gear a few of them came down to see what I was up to. They didn’t visit long, which was fine, because the sky was dancing with light. 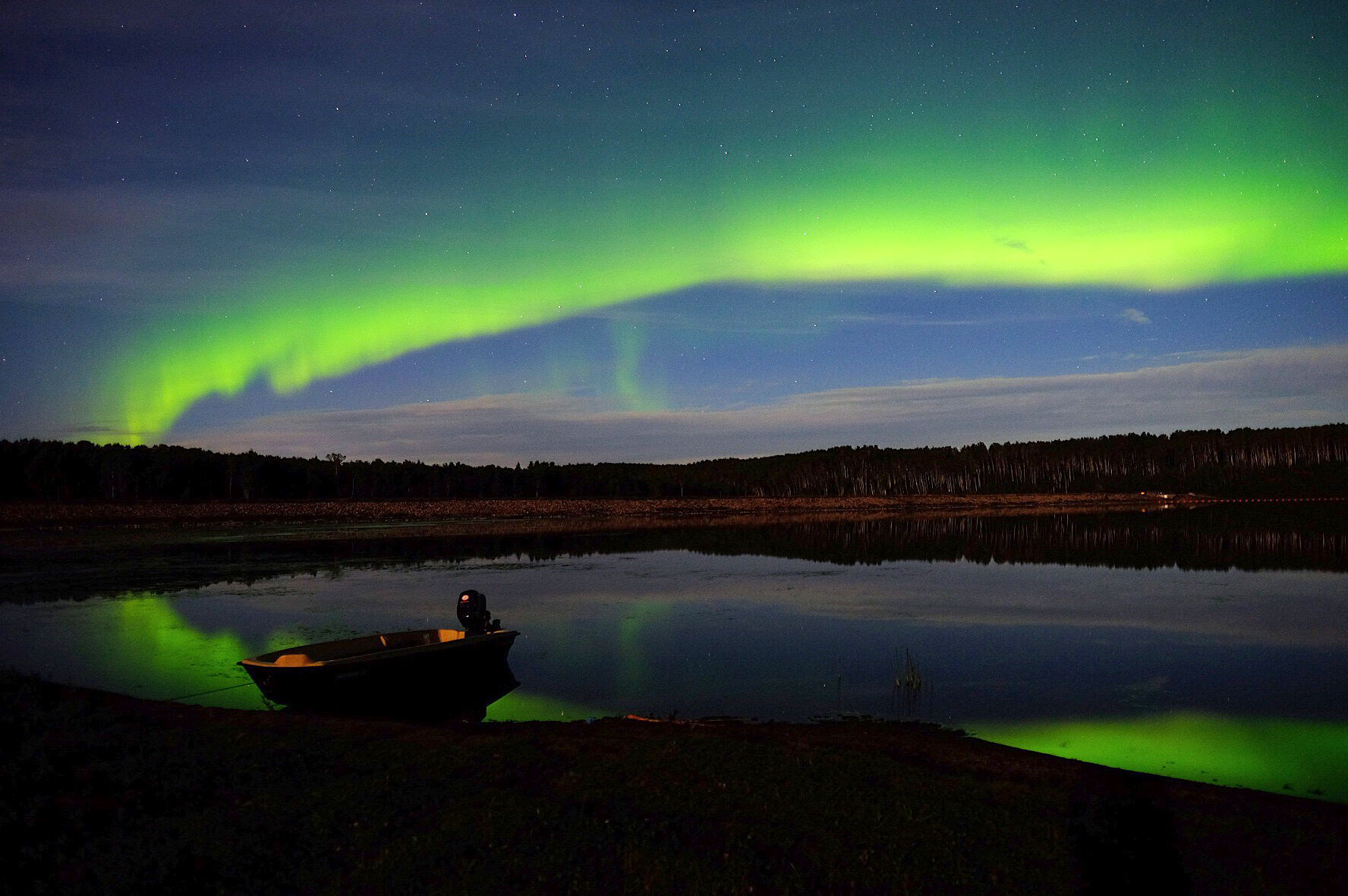 If one could visualize the wind, that would be my best description of aurora. Aurora is very fluid, continuous, and stretches from one end of the sky to the other. Watching the streams of light, it looks like it’s traveled a long way, with plenty more miles to go. The waves of light appear to have a thicker base toward the bottom, with rays extending upward toward space. Like the waves are sitting on an invisible barrier.

Staring, watching the aurora ebb and flow, for minutes on end, is incredibly peaceful. Other worldly. It’s an experience like no other and after experiencing it once, you’re addicted from that point on. 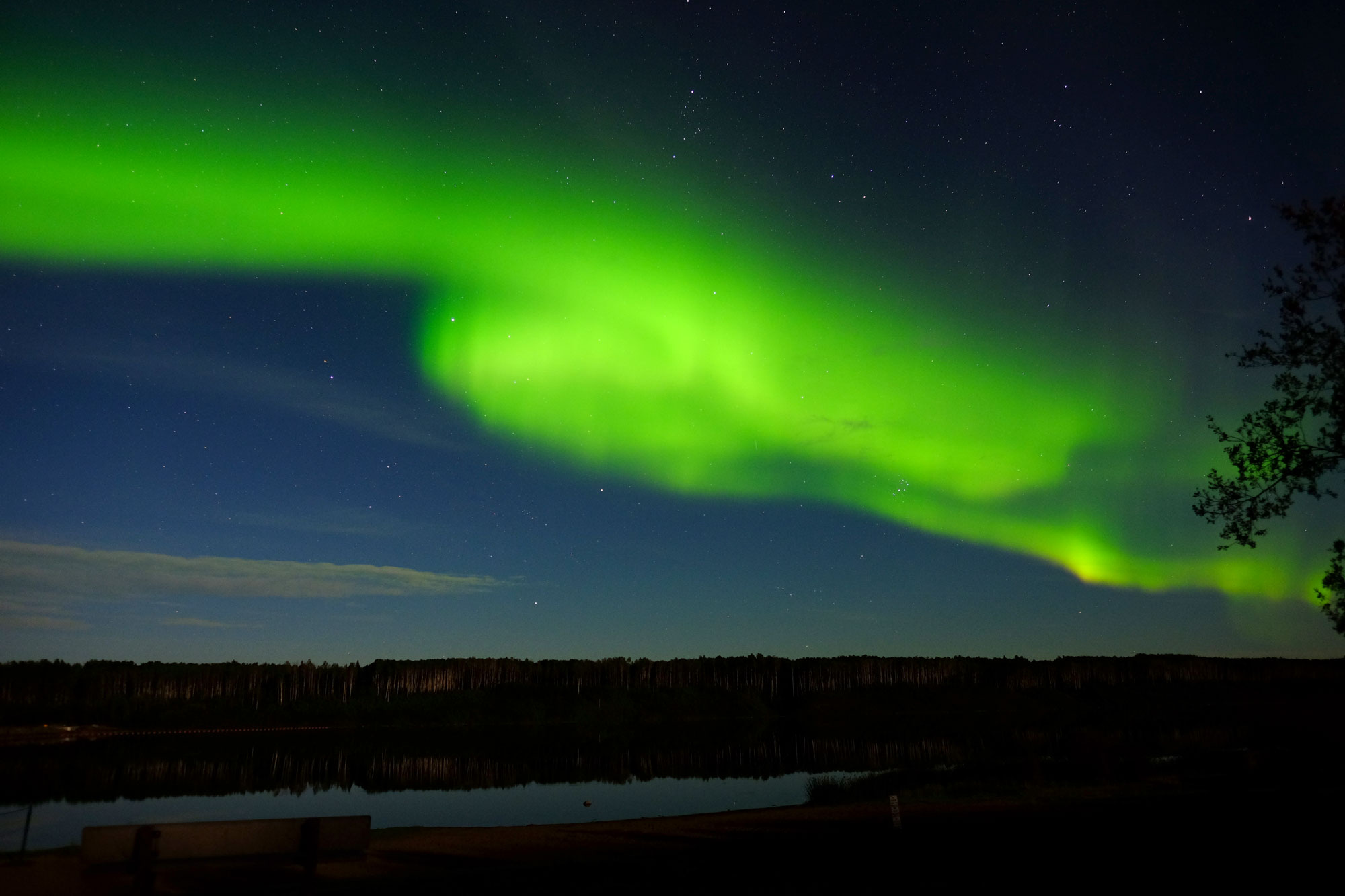 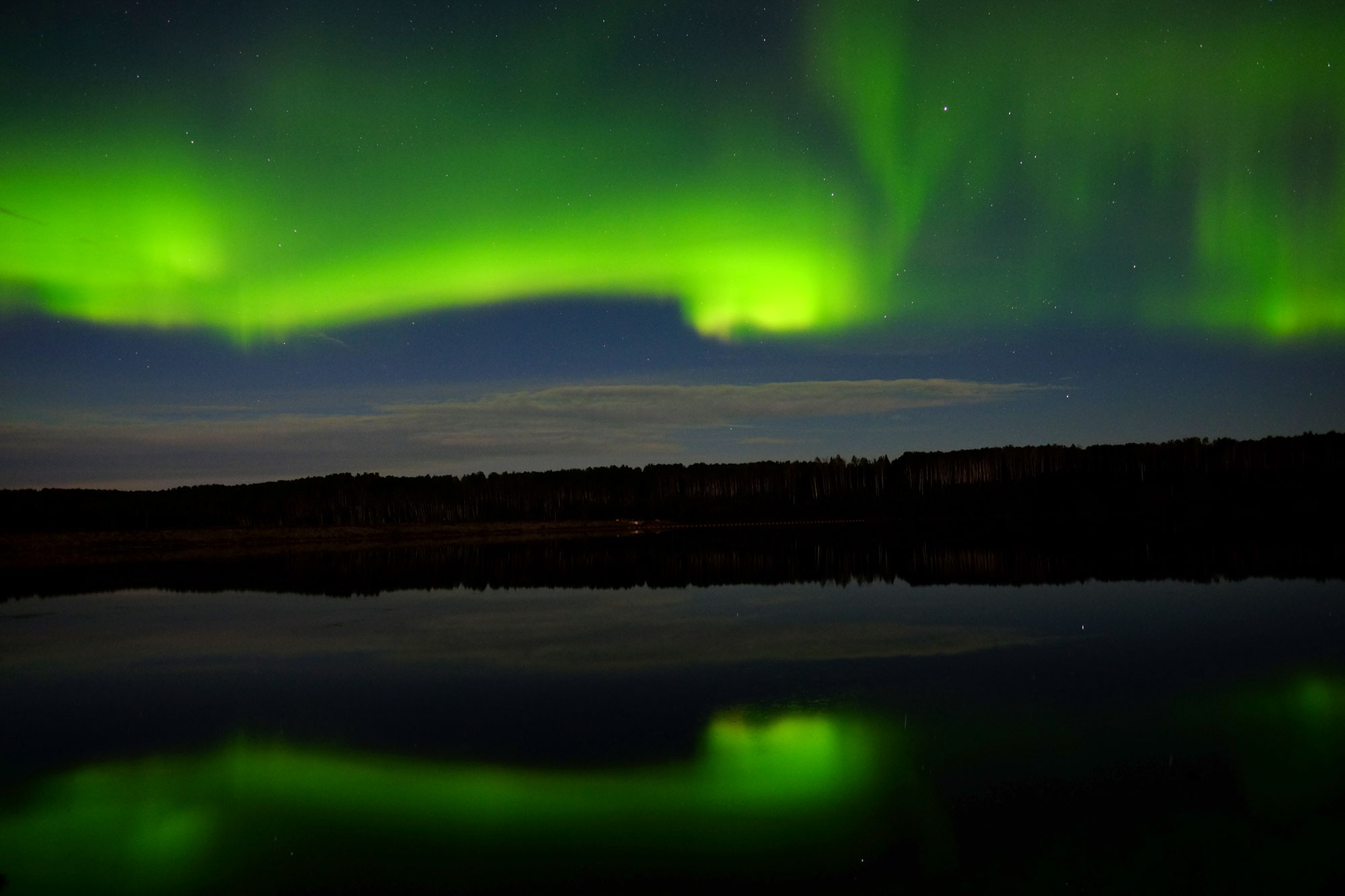 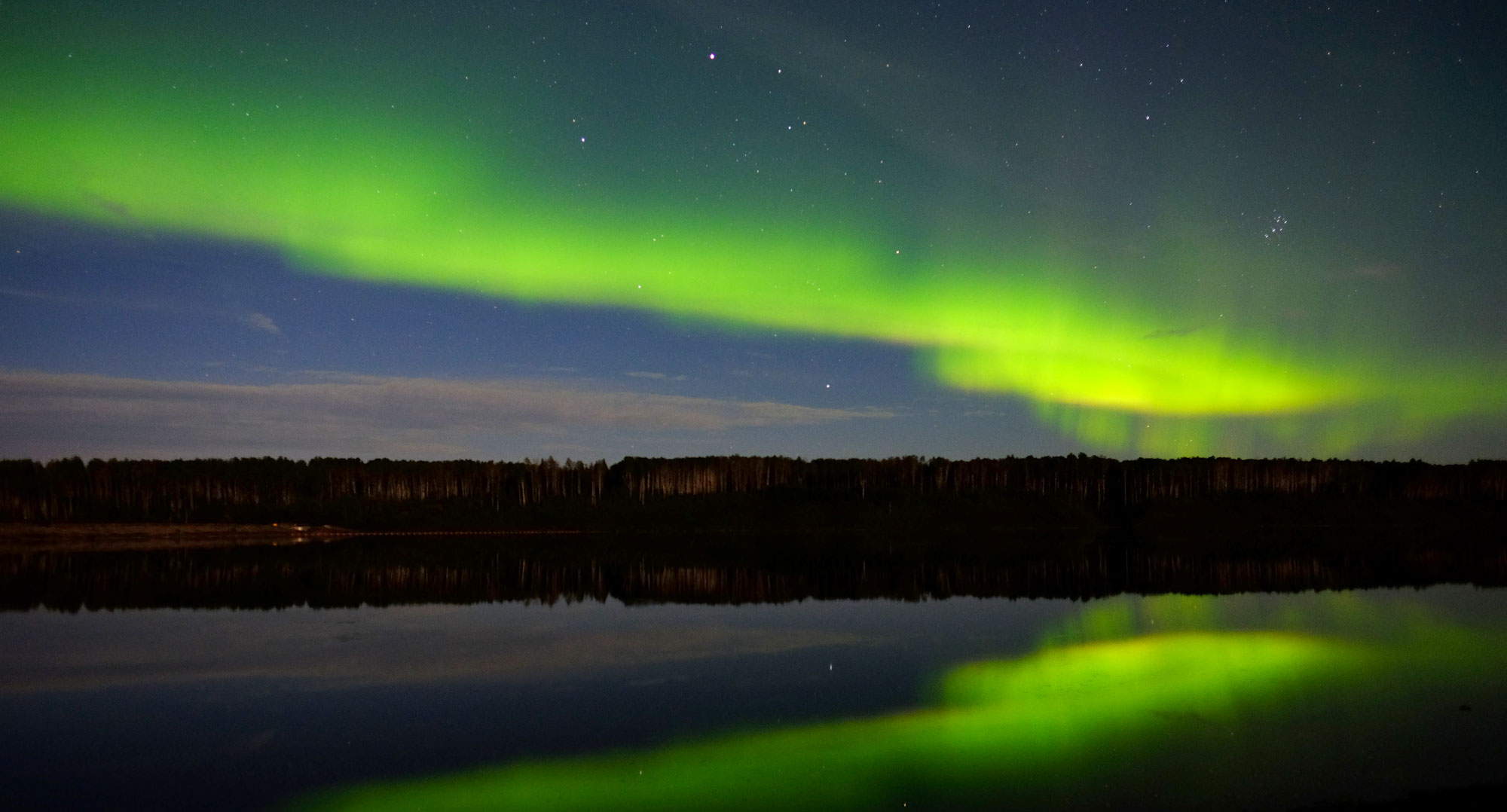 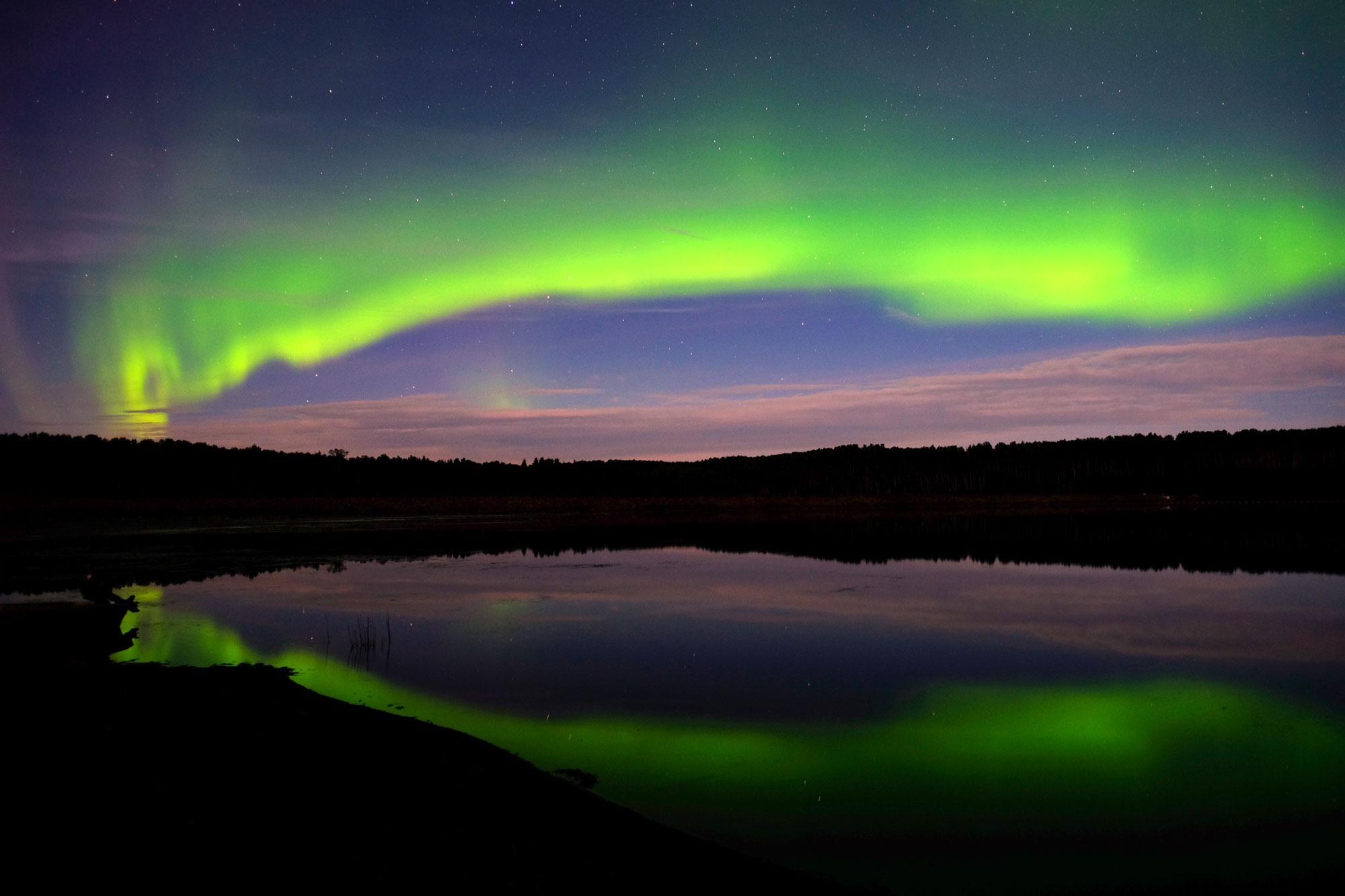 High Level put on an amazing show, but it wouldn’t be the last chance at aurora on this trip.

Part 5 continues with driving to Yellowknife.