The new MacBook Pro with Touch Bar has carried with it plenty of criticism even before it landed in the hands of customers. Work handed us new MacBook Pros a couple weeks ago. Here are some observations based on several days of use.

The graphics glitches are the weirdest part. With continued use, however, these issues seem to have lessened in occurrence with no specific action taken.

The log-in experience is off

With the addition of TouchID to the MacBook Pro, Apple is hiding the password field when presenting the user with the log-in screen. It took a while to realize I can just start typing to enter my password. Clicking the user icon with the mouse isn’t necessary and use of TouchID isn’t required. This is only an issue because I don’t keep my laptop open when connected to my monitor. 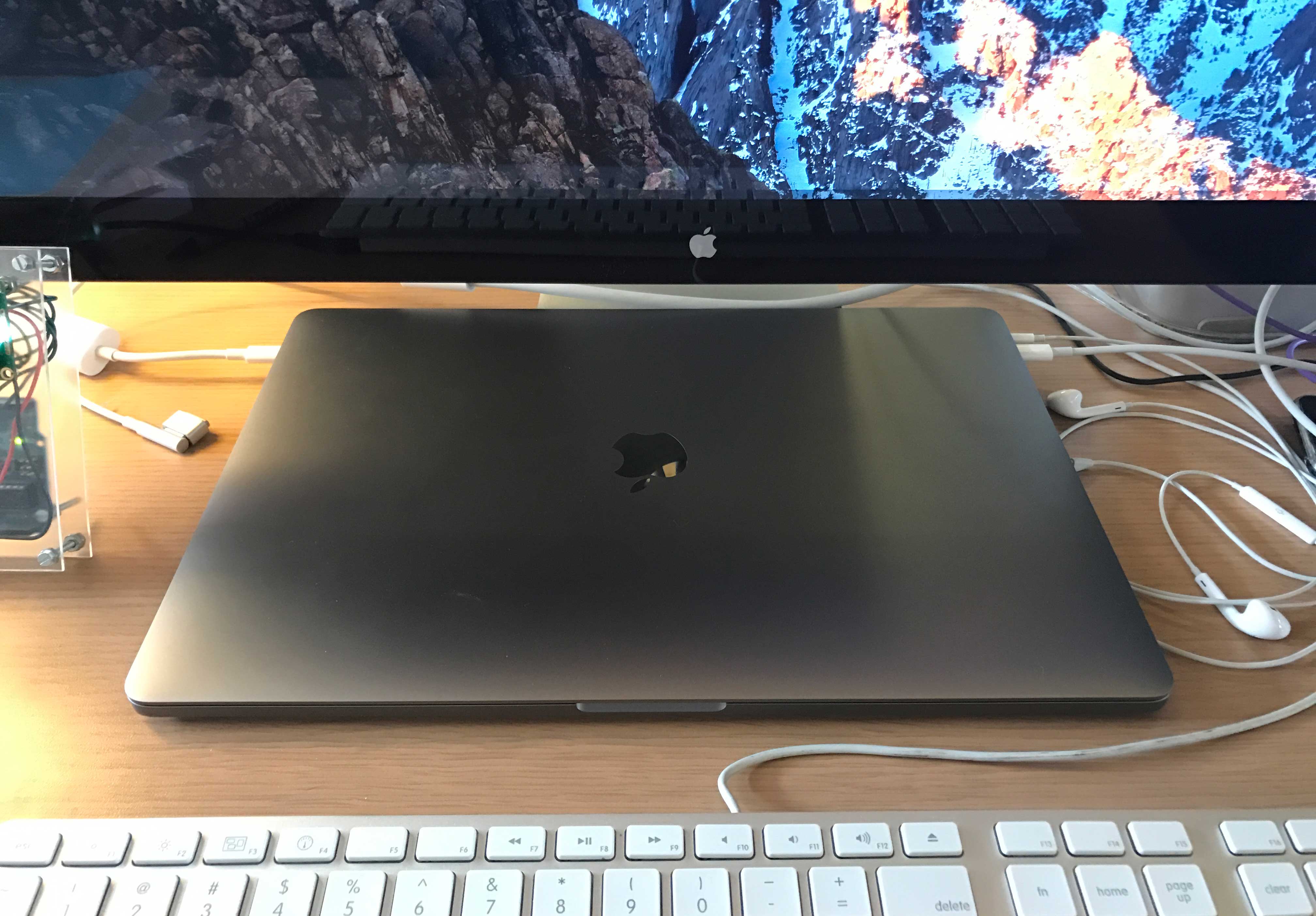 I rarely get a chance to use it, and when I do, I only use it when required. At work my machine is closed, connected to an external display. But when I’m not at my desk, so far, I haven’t found much use for Touch Bar.

From an experience perspective, it’s now a third input device, and second display device to pay attention to in addition to the traditional devices (trackpad/keyboard/display). The user is forced to pay attention to two output devices (display and Touch Bar) when switching context (between apps, for example). Many of the best Touch Bar interactions appear when using the keyboard. Unfortunately, most users are looking at the screen when using the keyboard. The Touch Bar remains out of sight and out of mind.

The keyboard feels fine. Key presses are louder than older MackBook Pro keyboards. The keys feel like they don’t travel as far, but my typing is in no way hindered.

It’s too big. There’s no longer a place to rest my palm because the trackpad spans from the bottom of the keyboard to the bottom edge of the MacBook. I’m finding myself relearning how to use the device. It’s very awkward.

but it will likely get better. The Apple Display I use at work can’t power the new MacBook Pros. I’ve been equipped with a number of dongles, including Thunderbolt to USB-C and a USB-C to three-port USB dongle. This will get better as USB-C becomes more widely adopted, but for now it’s a mess. 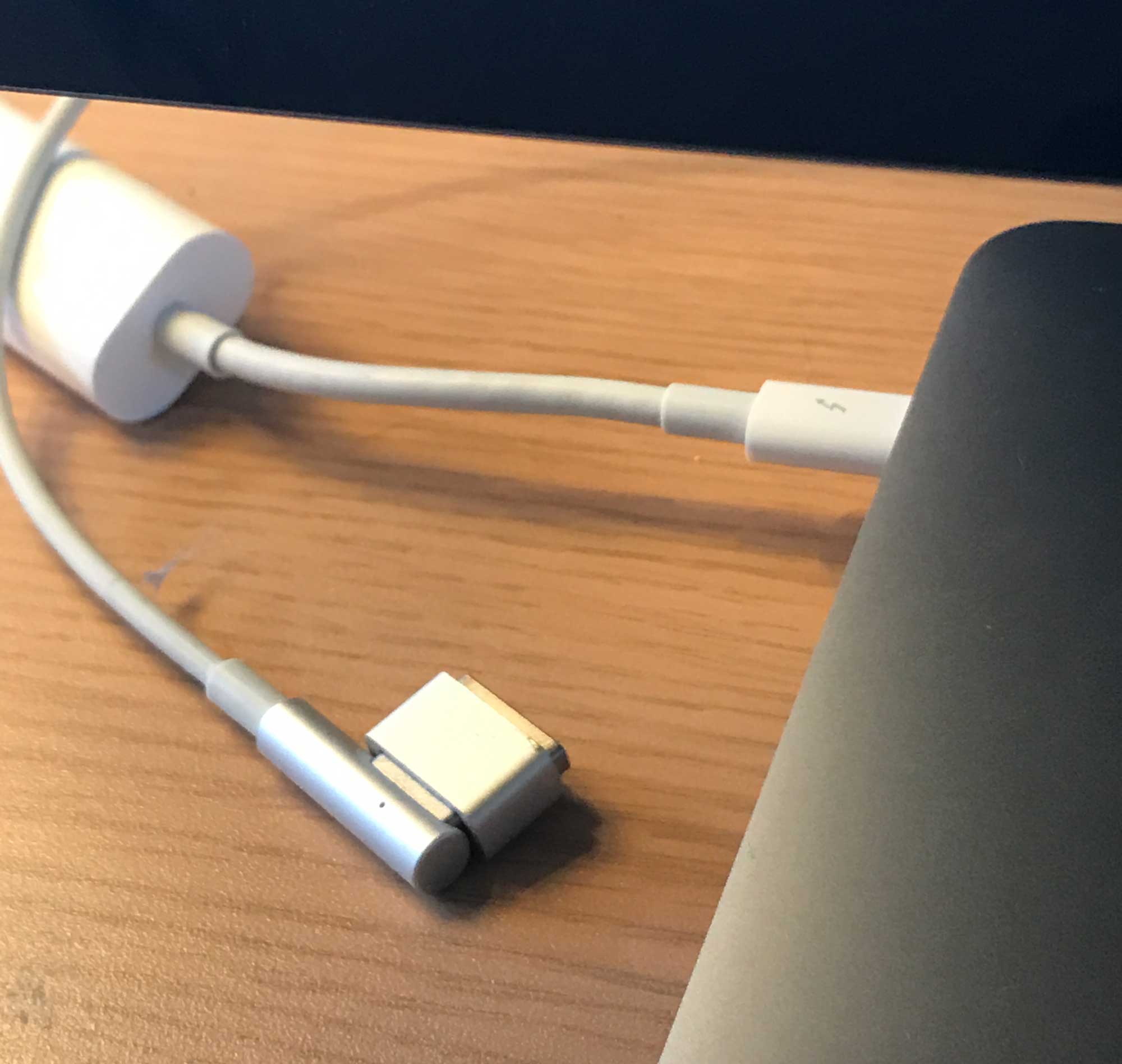 Honestly, this machine doesn’t feel much snappier than the 3-4 year old MacBook Pro I was using previously. Granted, Chrome is probably the biggest resource hog in my current toolset, but even with 28+ tabs open, there’s not much difference.

Battery performance isn’t nearly as impressive as my previous model MacBook Pro. Guessing, I would say the new machine provides 33% less use time when on battery power.

The weight reduction and slimness are a welcomed improvement. There’s a big difference here compared to previous models.

The Apple logo no longer lights up! That was a big differentiator between Apple and everyone else. Not to mention some serious marketing power being dialed down.

The pads on the bottom of the MacBook aren’t nearly as sticky as previous models. In the past, it was quite difficult to push the machine across a smooth surface like a glass table. Coupled with the weight reduction, the new MacBooks slide around very easily. A cat leaping off a counter could easily send the MacBook Pro flying.

The MacBook is still a fine machine. You’re probably not going to find Apple’s build quality in any other manufacturer, assuming you care about such details. If you’re buying a MacBook Pro for the first time, it’s worth every penny. If you have a 3 or 4 year old machine and are thinking about upgrading, I’d wait. I don’t think the price justifies the incremental improvements of this release. Let USB-C become more wide-spread and wait for another iteration or two of Intel hardware to really feel a difference in performance.