Now that I have a month's worth of time with Republic Wireless under my belt, I thought this would be a good point to write up a review of those first 30 days.

Republic Wireless is geared toward users who spend most of their time in an environment with persistent Wi-Fi. When in range of Wi-Fi access all phone calls are placed and received over Wi-Fi. When outside of Wi-Fi range Sprint is the carrier that all calls and data are routed through.

With most of a user's calling minutes and data flowing over Wi-Fi, Republic Wireless can charge a low monthly fee of just $20 for unlimited everything. 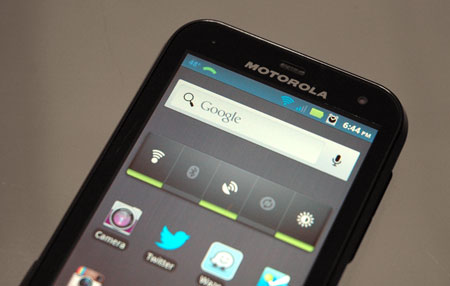 With access to Wi-Fi at home and work, this works out well. Even prior to Republic Wireless, my data usage over the cell network never made it over half a GB per month. So far so good! Let's get into some detail.

First Impressions
While this is mostly UPS's fault, my box arrived mangled and open. Luckily nothing had fallen out of the box in transit. (As far as I know.) I was looking forward to Republic Wireless stickers that other customers had received but was disappointed not to find any in the box. Maybe they fell out along the way.

Luckily the phone itself was unscathed. I was able to open everything up, charge the phone, and make calls right away. 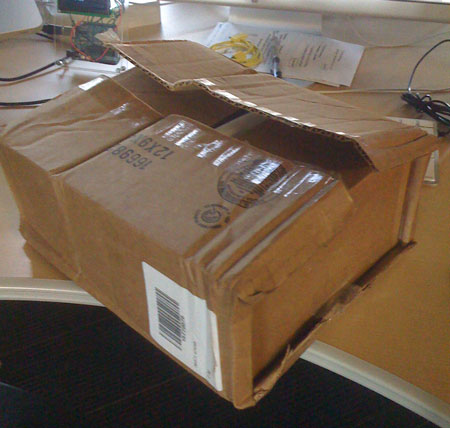 UPS did a number on this package.

The phone: Motorola DEFY
The DEFY is by no means a high-end Android device, but compared to the iPhone 3G that I was using previously, the DEFY is lightening fast. Switching between apps produces no lag. Waiting (sometimes minutes) for the keyboard to respond after a keypress on the iPhone is a thing of the past. 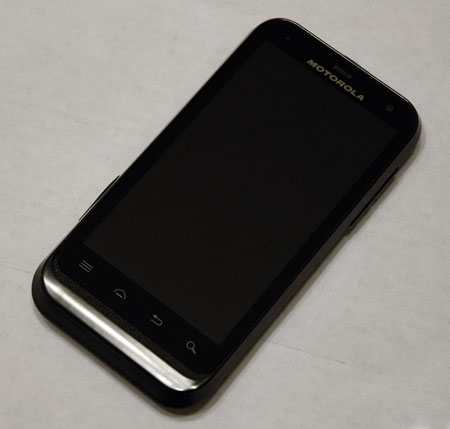 Coming from the iPhone, the DEFY feels cheap and fragile, even though Motorola touts it as a rugged device that is water resistant and able to absorb shocks.

The best hardware feature of the DEFY compared to the 3G is the high-res screen. Even switching back and forth between the DEFY and the iPad 2, the iPad begins to look low-res. 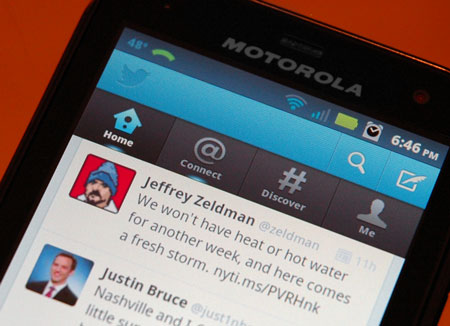 Notice the smoothness of the edge of circular elements like the @ symbol.

GPS is more erratic on the DEFY compared to the iPhone. Some of this could be attributed to Waze's software, but when sitting at a traffic light the GPS software has a difficult time knowing that the device is stationary. The position icon will move back and forth and the map will spin around thinking the device's direction has changed. Never saw this behavior on the iPhone.

Android UX
This being my first Android device, I actually expected a much worse experience after using iOS. There's no question Android isn't as polished as iOS, but it's by no means unusable. The biggest fault in Android is the lack of consistency when interacting with similar UI elements across apps. For example, when using a text field, selected text is the usual indicator that text will go away when the user starts typing. This appears in Android, but only half the time. In other instances when interacting with a text field, the text will not be selected yet still disappear when the user begins to type. That makes me question whether or not the text I'm about to modify is about to all disappear.

This text is clearly selected.

There are tons of little things like that throughout the OS. When the screen is off, iOS will light the screen and display a notification when receiving a text message. Android does not do this, so it's difficult to know when notifications are arriving if you have the phone on silent.

Pinch and zoom gestures aren't as smooth as iOS. Icons aren't very well designed and often use unnecessary animation. The icon indicating that GPS is in use is an animated crosshair. There's no reason to create that extra distraction for the user.

The row of hardware based buttons at the bottom of the screen are silly. That should all be in the software UI.

Individually, these are all small annoyances, but they can add up to a less than pleasant experience.

Android does offer a few nice items, including the ability to have on-off switches for Wi-Fi, GPS, etc. on the home screen. They're not there by default which is great for normal users, but it's nice to have the option for power users. I do like Google's voice commands. I find myself using that quite a bit for alarms, weather conditions and measurement conversions.

Most of these complaints can be attributed to the DEFY running Android version 2.3. Next month that will be a two year old operating system. In the tech world, that's a lifetime. Unfortunately, with the Google/handset manufacturer track record, I'll be amazed if I see a newer version of Android show up on this phone.

Wi-Fi Calling
I think this is where Republic Wireless will really shine once the service moves out of beta. Wi-Fi call quality placed on a connection without heavy network traffic is quite superb. Audio has much more clarity than a traditional call placed over a cellular network.

On the shared public Wi-Fi at work (which is very user heavy) I do get reports of echoing, or artifacts similar to those heard on services like Skype or Vonage when under similar network conditions. On the receiving end, I've never heard audio drop or degrade.

I had to make some tweaks to my router at home to hear both ends of a Wi-Fi conversation, but once that was done I haven't had any issues at the house. From what I've read on the Republic Wireless forums, the next over-the-air phone update will address some of the router issues that require settings to be changed by the end user.

I've only had one person comment on call quality and that's only been when standing outside of the building where Wi-Fi coverage gets sketchy, combined with the busy network traffic. Not bad for beta.

Cellular Service
Cellular service from Sprint is what you would expect from any carrier: Reliable calls and data based on their coverage map. Data doesn't appear to be limited or throttled for Republic Wireless users. I recently spent two long weekend completely off Wi-Fi and encountered zero issues.

SMS Messaging
A couple issues to keep in mind here. Text messaging is only mostly supported. MMS messaging is not supported at all. Basic text messaging works without issue, but a lot of services like GroupMe and WoW don't support sending messages to VOIP based services like Republic Wireless. It does vary service to service. Google Calendar alerts send just fine. But, keep that in mind if you rely heavily on those types of services.

Go for it.
All in all, for the price, the service is completely worth it. If you're not a heavy phone and data user, Republic Wireless takes care of the basics. Calls are clear and data is abundant. If you don't consider yourself technically inclined, wait until they get all the kinks worked out and sign-up once they're out of beta. Adjusting router settings isn't something the average user should have to deal with.

I'll be sticking with the service and look forward to what Republic Wireless has in store in the near future.

The Good The Bad