This past week we made our final call to Comcast. We cancelled. No more ridiculous phone calls asking them to fix their service. No more sending them money every month. It feels good. 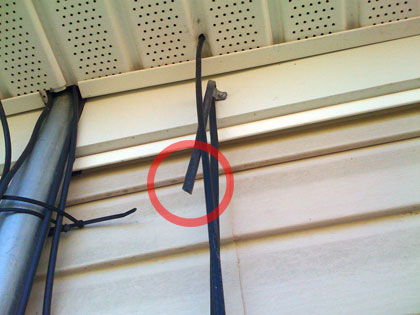 We cancelled Comcast cable television service last year in favor of free television, but we were still holding on to their internet service. All had been mostly well until the past week or two when a Comcast truck showed up on our street. They were doing a little bit of work. Likely hooking up the new neighbors with some cable television service. Maybe some internets, too. Well, as soon as that happened, and maybe it's all a coincidence, our Comcast internet service went down the toilet. It's strange (it always is) and perhaps unexplainable, but we no longer had internet service in the morning. Everything worked fine in the afternoon and evening, but in the morning, nothing. This has been going on for over a week.

My little trickle of Comcast internet service in the morning.

So I called Comcast one day while I was at work. I was alerting them to a problem with their service. I was hoping by helping them, they could help me get back online. Well, they wouldn't help me. I was informed I would have to reset my modem and router with a Comcast rep on the phone in order to get any kind of support from Comcast. Obviously, being at work, I didn't have access to my modem or router. I told the rep we had reset the modem and router multiple times every day for several days. I once again let them know there was a problem with their service. Could they help me? Sorry, they can't issue any support without confirmation of a modem and router reboot happening over the phone with a Comcast rep. Comcast decided that was the end of that call.

I called right back. Some how (this was some sort of sign) I ended up with the same agent I had just spoken with a minute earlier. "I believe I just spoke to you a few minutes ago. We can't give you any support until you reset your modem and router with me on the phone." This time I let into the agent a bit. I promised her we reset our modem and router a million times. I promised her nothing had changed on our end. I promised her something was wrong with the service on Comcast's end. I just wanted my internet service to work. "Can you help me?" "Fine, I'll start a support ticket, but I'm going to have to note in your account that the modem and router reset was not done over the phone under Comcast supervision..." And so that was it. One too many conversations like that over the years.

A couple years back we had the same tech come out to the house 3 or 4 times in a row all in one week. Comcast's internet service was down and they just couldn't get it fixed. The tech continually berated me for the orange light that was illuminated on my router. In his mind this meant I needed to update my router firmware. This was a big problem (in his mind) and was likely the cause of all the service trouble we had been having. That's when I tried to explain the orange light was the result of the open source firmware I had installed on the router. I assured him all was fine and well with the router. He handed me a photocopy of directions detailing how to upgrade my router's firmware.

That's when Comcast cut my phone line. The final tech to come out spent a long time outside at the junction box and for some reason decided to cut the phone line that runs from the pole to our house. I still can't explain that one.

And now Comcast is in it's twilight hours in our household. This is likely the last post to be published from a Comcast connection hooked up to my house. It might be different if they gave even half a damn. But they don't. Good riddance, Comcast. Here's hoping my next internet provider will do a little better. (I'm looking at you, TDS.)