With Operation Chokehold just around the corner, I've been pondering Just how many users it takes to hose AT&T's cellular data network. My guess: It could take as few as 550 concurrent users at one cell site. 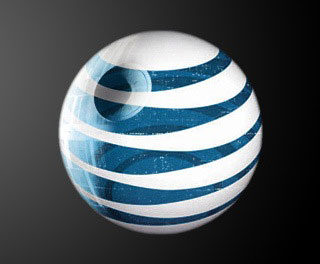 This is very unscientific, but using some educated guessing and some "solid" numbers from the internet, I've attempted to calculate just how weak AT&T's network is when too many users try to use their phones for data purposes all at the same time.

Last month I attended the CMAs in downtown Nashville. From arriving about 40 minutes before the show started, until the crowd dispersed, AT&T's data network was totally hosed. I had zero data access. It was abysmal. At one point I couldn't even send text messages. I kept getting 'Timeout' errors.

So that got me thinking. Just how many people were concurrently trying to access the network that caused such a large interruption in service?

Luckily, being at the CMAs, we have some good numbers to start with. The Sommet center holds approximately 20,000 people in that particular configuration. Let's add on another 5,000 people to include staff, and population immediately surrounding the affected cellular area (tourists, people working late, etc.).

From our number of 1,125 AT&T smart phone users, let's be very generous and say half those people were all trying to use their phones at the exact same time. That number comes to 563 users accessing the data network all at the same time.

Does that number seem low? Well, I've written before about attending crowded events like Petit le Mans and Concours d'Elegance and experienced the same poor data performance. Something else to ponder: I had good data access during a Predators game at the same location with roughly the same size crowd. But, the big difference was the network access. At the CMAs you have thousands of people desperate to snap and share photos and text of A-list celebrities while at a hockey game, most people are focused on the game, not their phones.

There are a lot of unknowns, still. How many "cell sites" service that downtown area of Nashville vs. an area like Road Atlanta and the rural beach of Florida. What's really causing the network to stall? Is AT&T's internet connection at their towers too narrow, or do they not have enough radio bandwidth to handle that number of phones concurrently?

Regardless of the choke point, AT&T has some work to do to get their network in order. Especially when you consider the high monthly price point they command. Hopefully Operation Chokehold will open AT&T's eyes.