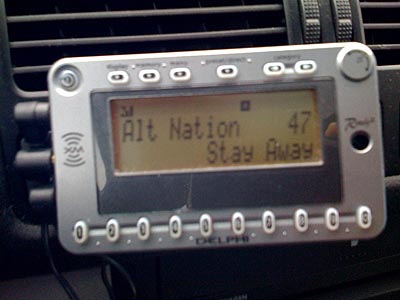 Yesterday on the way to work I noticed XM had switched most of their music channels over to Sirius channels as a result of the Sirius-XM merger.

I've been an XM subscriber for several years now and have loved it. There's nothing better than commercial-free radio. XM had a lot of fun with their station line-up as well. For example, most of their rock stations were named after characters from the old I Love Lucy TV show. 90s alt-rock was Lucy, 80s alt-rock was Fred, modern alt-rock was Ethel. Their promos and bumpers reflected this well.

Sirius channels are much more generic. Alt Nation, Classic Vinyl. So it sounds like no more witty promos and station IDs. One of my personal favorites from XM went along the lines of "Satellite Radio--Keeping listeners sterile..." and on the radio display it referenced the mass amount of power the satellites have to pump out to deliver the signal from space. Lucy mostly made fun of Art History majors and how much their life probably sucks now, post college. Good stuff.

Nothing like that coming from the Sirius folks. Reflects their name well, I suppose.

There's just something sad about your favorite radio station going away. Reminds me of Thunder94 going out in the late 90s only to be replaced by KDF which soon switched over to country music. That left a nice void of alt-rock in the Nashville market for a good while.

Anyway, I may try streaming Pandora through my phone during my commute and see how that works out.