Wim Crouwel is my new favorite designer. His philosophy and process were right on. 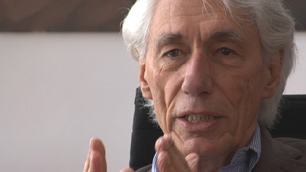 Tonight Merredith and I watched a screening of Helvetica put on by the local AIGA chapter. The film was better than expected. The documentary is mostly interviews with prominent designers, but all the interviews were very interesting with a wide range of opinion about design. Crouwel would go on about how there's only maybe 12 good fonts and how he really only ever uses three typefaces because everything else sucks. Then you get Sagmeister talking about how limiting yourself to just a few typefaces would just produce horrible worthless work over time. Obviously both designers produced great work. I think the big lesson is it doesn't really matter what your process is as long as it helps you produce good work. And so we learn even processes become subjective in the world of design.