The iPhone has finally materialized and not too far off from the sketches in my last post. I'm surprised they packed an iPod into the thing, but so be it.

Ernie mentioned the lameness of the 4 main icons in the bottom "Dock" of the main menu, and I have to agree. He especially noted the mail icon. Here's a look at the iPhone mail icon and the Vista mail Gadget icon.

The Vista icon certainly has a bit more attention to detail paid to it. In addition, the clouds on the iPhone icon don't exactly keep with the consistency of the other icons.

The color of the bottom four icons bothers me. Green, Blue, Blue, Orange. The Safari and iPod icons are complementary colors, while the phone and mail icons sit next to each other on the color wheel. I wonder if Apple revisited the icon colors and made the iPod icon a purple color since that sits on the other side of blue on the color wheel, would the icons be more pleasing to the eye when they're all lined up? Very particular details to think about. 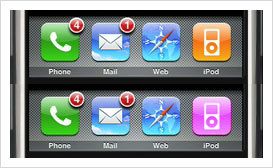 Aside from the iPhone, Bill Gates announced the Windows Home Server. I have a feeling this device isn't going to be snatched up in any kind of great hurry. Your average computer user struggles enough with a desktop system, and most advanced users are probably more likely to build their own server at a much lower total cost.

Today I've spent most of the day trying to get XP running under QEMU on my G5 at work. So far so good. Menus are surprisingly responsive, which is encouraging, but the install is painfully slow. This is my first attempt at emulating x86 on PPC since using Virtual PC on a 233mhz G3 some years ago. That type of emulation back then was just brutal. 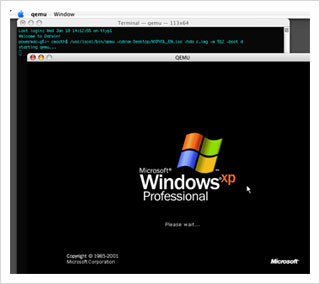