2Pac The Fish passed away last night after a long and fruitful life. 2Pac grew up at Hess Hall at the University of Tennessee where she resided in the front desk fish tank. It's unknown how many years 2Pac lived at the front desk before I adopted her my sophomore year as a means of rescuing the other fish from her. After an eventful but hardening stay at UT, 2Pac moved to Nashville to live out the rest of her days. 2Pac lived to be at least 8 or 9 years old, but could be much older. She tried to attack everyone she met, people, cats, and dogs included. 2Pac had more personality than most other animals. Unfortunately, it was quite a mean spirited one. A brief memorial service was held this morning at Percy Priest Lake in LaVergne. 2Pac is survived by her best(and only) friend, Biggie The Chinese Algae Eater. 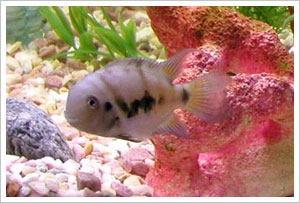